This modernized, combined-cycle natural gas plant was constructed at a cost of approximately $1.3 billion and replaces a 1960s-era, oil-and-gas-fired plant that was demolished on June 19, 2011.

Utilizing cleaner-burning, U.S.-produced natural gas frees FPL from using imported, foreign oil. System wide, the company has reduced its use of imported foreign oil by more than 98 percent – from more than 40 million barrels of oil in 2001 to less than 1 million barrels annually.

The new plant will use 33 percent less fuel per megawatt-hour which will save customers money on future fuel costs and produce far fewer emissions. It will generate up to 1,250 megawatts of electricity, or enough to power roughly 250,000 homes and businesses.

Florida manatees follow an annual migratory route that leads them to areas of Florida where they warm themselves during the winter months near natural springs or warm-water outflows of coastal power plants. Over the years, FPL has nurtured a special relationship with these gentle sea cows. In fact, our company has supported more than 35 years of manatee research, including aerial surveys, which have been important in understanding manatee migratory patterns, habitat use and population trends. In addition, we have been a decades-long leader in developing and disseminating education materials focused on manatees and their conservation.

In 2014, FPL unveiled plans for an innovative manatee education center for the public adjacent to its clean energy center in Riviera Beach on Florida’s southeast coast. Manatee Lagoon -- An FPL Eco-Discovery Center opened in February 2016. It features a Key West-architecturally styled structure situated along the Intracoastal Waterway in Palm Beach County. The facility offers an engaging educational experience for visitors and focuses on manatees and the ecosystem of the surrounding Lake Worth Lagoon. Amenities will include:

Environmental stewardship is one of the cornerstones in FPL’s efforts to continue to make Florida a better place to live and work. That is why we have supported manatee research including telemetry studies and aerial surveys at our facilities to help assess the health of manatee herds. We continue to work with non-governmental organizations as we explore additional programming options at FPL Manatee Lagoon and welcome cooperation from environmental agencies that are tasked with protecting these wonderful creatures. 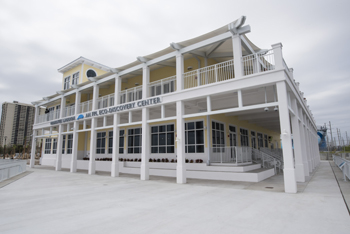